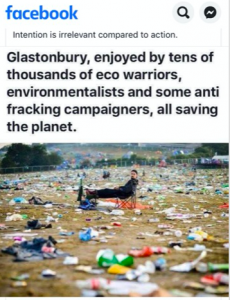 So I have to say “I am on my soap box for this blog” I was appalled when this popped up on my Facebook, the amount of fly-tipped rubbish was alarming!
To think that many of the people that were there are campaigning against the exact problem above.

Eco-warrior is a self-description for an environmental activist that adopts a ‘hands-on’ effort to save a plot of land.

Anti fracking campaigners supports the impacts of climate injustice which will be felt around the world.

Pupils from around the UK went “on strike” on Friday 15th February as part of a global campaign for action on climate change. Students around the country walked out of schools to call on the government to declare a climate emergency and take active steps to tackle the problem.

But yet here at Glastonbury you literally did the exact opposite of what you believe in. Why?
Was it the excuse ‘Oh I was having a good time and didn’t really notice’, ‘My couple of bottles or cans won’t make a difference”
Or just simply ‘not really my problem, someone else will clear it’

So I would say “realistically you are no better off than than the people who fly tip down country lanes or at the back of peoples houses”.

Here’s a little insight as to what it takes to get those fields you danced the weekend away back to normality.
2017 The clean up, was about £785,000 and was expected to last six weeks. Despite organisers urging festival-goers to take their rubbish with them, and to try to leave “zero waste”, photographs after the event show the field strewn with rubbish.

This year The entire clean-up is expected to take four weeks and praise has to be given that out of the 55,000 tents only 500 were left behind.

So my little rant ends with
‘next year lets make our actions louder than words.