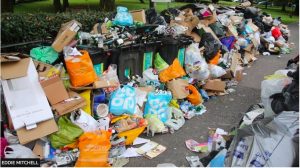 The latest news to bring  yet more disruption to local residents is that your local bin man is threating to go on strike over pay.  Bin strikes in Manchester could be called off if workers vote to agree on a ‘revised’ pay offer.

Earlier this month, members of trade unions GMB and Unite – who make up more than half of the workforce – took part in a ballot with up to 94 per cent voting in favour of industrial action over an ‘offensive’ pay offer by Biffa.

The outsourced waste company, which has a contract with Manchester council for bin collections, offered most of its staff a 1.75 per cent pay rise – worth 17p an hour. Some workers said they were prepared to ‘picket until Christmas’ over the offer.

If the strikes go ahead, up to 220,000 households could be affected. Industrial action is currently set to begin on May 3 for ten days, with a further two weeks of strikes planned from May 23.

In a update issued yesterday (April 27), GMB said refuse workers are now set to vote on a revised offer that has been put forward. If workers accept the deal, the strike action will be called off. The result of the vote is expected tomorrow (Friday). The details of the offer have not been revealed at this stage.

Michael Clark, GMB Organiser, said: “GMB and Unite met with Biffa today. After long negotiation, the council made a revised offer which will now be put to our members to vote on. The result of that vote is expected Friday.”

Brighton and Hove have just returned to work after 2 weeks with a deal made with GMB.

This however caused a massive problem in only 2 weeks with a back log of bin bags now sitting on the streets and the council have stated that this will take up to 4 weeks to clear.

Contractors were called in on Sunday to start tackling the backlog, and could be used again in addition to the council workers to speed up the cleaning process.

If you’ve ever had to smell two weeks of waste piled up in your city’s streets trust me it is not pleasant.

If this does happen The Rubbish Removers will be able to help. Call us on any of the numbers below, email or visit our website where you can access live chat.